philoblog
Tuesday, June 28, 2005
ghostghost, a rather intriguing new blog w/ odd "remixes" that leaves the sources fairly intact yet manipulated digitally. i think all the tracks are by brad of the mae-shi. i particularly think bachgaku is beautiful. now, why is my blog pushing all the text down past the sidelinks???  ¶ 4:51 PM

Sunday, June 26, 2005
Here is a translation (thanks fuyu!) of the Studio Voice article. A pretty amazing perspective on the label:
Are You Illigal-ing? Do you know IlligalArt? It is a so dangerous American record label. About 5 years ago, the label sold 5000 discs of the album 'Deconstructing Beck,' pre-collaged samplings of Beck's music source without his permission, as well as 4000 copies of 'Extracted Celluloid', which used samplings of various soundtracks of movies such as 'Titanic' (both albums are produced by several artists). Then the label planned and gave up to sell the album 'Bed In' which used totally mixed samplings of Madonna and Britney Spears like lesbian. The label has been violating copyrights and been joking of big corporations like major record labels or movie companies. Anyway you can see the label is doing something as dangerous as terrorist. Beside these albums, it released perverse albums of some troubling artists like Wobllie(?), GirlTalk, Jane Dowe, and Hot Troche. Everything is directed by a mysterious producer called Dr. Philo. It is said that his name is on the FBI blacklist. He lives in deep mountains of Ohio, cutting up music and music and emailing to contact his colleagues around the world. Wow his everyday is like that of a certain bomber who makes bombs secretly. None of artists who released albums from the label has met him. A rumor says Dr. Philo believes in a cult. The rumor says too that he has 12 children and hopes doing label's more bad terrors with all of his family. He might has a thought to attack contemporary societies, and might be categorized in the same group with Los Apson(?). But he is still not just weird. He has thoughts and ideas. The American government, tied up with big companies, is abnormal. If the label's target was the abnormality, Dr. Philo should be quite normal. The label has a sense of humor as well as a clear and critical perspective toward society. The label is awesome cool, isn't it? By Akira Onda  ¶ 10:16 PM 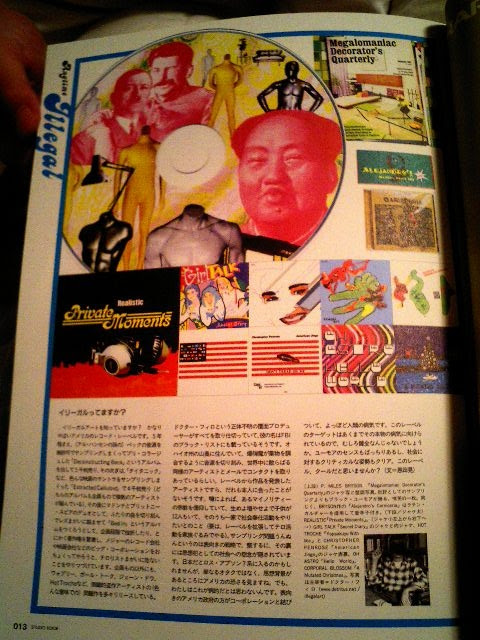 Wednesday, June 22, 2005
Empty Bottle in Chicago on Monday.. i was fortunate to be invited by SR to perform as part of his Yea Big project. i was a little worried since i had no time to prepare until sound check. during sound check i could tell my sounds weren't quite mixing well so i spent some time searching for better sounds. a few hours later we opened up the evening and i think it went fabulously well. there was of course a moment where i asked SR if i was making certain noises (that's always a bad sign when i'm unaware of which sounds are mine), and then another moment when i realized my controller wasn't responding (for how long?), but given the improvised nature of things a few fumbles is ok(?). i liked the format SR decided on... sort of DJ'ing his tracks and then less structured discord in between with both loud and quiet moments. the last track he cued up is my favorite, "Please Die, and Leave Me Alone," which he cleverly extended for a swelling climatic finish. next up was Dragons 1976 (jazz trio) and Kill The Vultures (angry shouting hip hop w/ trashy beats). overall an eclectic evening that leaves me most impressed with the Locust label (and sub labels!).  ¶ 12:03 PM

Friday, June 17, 2005
street performing up in Chicago, this is from Stefen Robinson's new blog:
"no more than one hour after arriving home, i hit the streets again, this time with good old Foul Mouth Tommy. this outing ended with two 12 year old hood rats (i know the term "hood rat" isn't very p.c., but thats what they were... little punk ass hood rats) telling tommy to give them one of his drum sticks. after very little discourse, hood rat tempers flared and one of them yelled at tommy and i, "you a grown man, nigga, i'll knock both ya'll asses out!" this was followed by me laughing and tommy banging away even harder at his drums. after hood rat intimidation tactics failed, more cursing took place and tommy's face began to get red. but then the situation ended, before further escalation, with tommy giving in and handing one of the hood rats a drum stick and yelling, "now get the fuck out of here!" later when i asked tommy why he gave the little fucker his drum stick, he said he was about to throw the kid down and choke him, and he wasn't sure if he would have been able to stop choking him, and the only way to avoid this was to give the kid a stick. so the hood rats left, one drum stick richer, and lived to hood-rat-it-up another day."  ¶ 9:44 PM 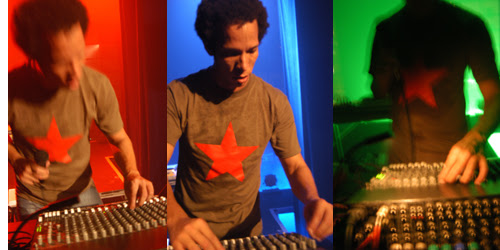 Tuesday, June 14, 2005
the fcc and college radio.. with fines increasing exponentially could it be the end of free form radio?  ¶ 11:59 AM

Monday, June 13, 2005
save target as... finally an mp3 blog that is neither too indie or wire-ish or music journalistic. just experimental and electronic music i hope. we'll see how it evolves.  ¶ 12:27 PM

"There's so much more work [involved] to pay attention to what's new. It becomes really hard for a band to have a good sense of its history. Doesn't mean that's bad. Just means, I don't know. I think there's a reason why good bands were 19 and 20 in the 70s, and in 1966, they were 17. And that's very hard right now. New bands that are very young, they're not as good, they're not as new. Because they inevitably sound like the Who or, you know, AC/DC. They sound like something else. And it's very hard for them to crawl out from that and do something unusual. Or they're forced to be like, quirky individuals. It's very hard to find your own thing right now. I mean actually it took me till I was 29, 30 years old, to have any sense that I was doing anything my own. Any sense at all. Maybe that's just me. Maybe I'm just a hack, but it just took a long, long time to swim my way out of history, swim my way out of indie rock. Swim my way out of everything. I don't really know what could possibly be the solution to it. There are just so many tripping points into ego, so many tripping points into compromise. I don't know how people do it. I don't know how bands do it. Everything feels very very compromised." -James Murphy at 35  ¶ 10:31 AM

Wednesday, June 08, 2005
email from Shari Z.: "I dreamed last night about it--all the committee wanted to talk about was STAR TREK. What's really hilarious is that I had to step in and pretend to be Jean-Luc Picard to stop someone on your committee named Shirley from turning the committee against you. Turns out, Shirley was an evil entity with two heads (cat heads, no less), if one had the vision (and only I had it) to see her in her true form."  ¶ 4:47 PM