philoblog
Wednesday, November 29, 2006
"If Anshe Chung gradually sold all her Second Life assets over the span of a year or two to prevent market devaluation, and if all the assets actually in the inventory of various avatars working for Anshe were successfully transferred back to her, and if throughout that time the in-world economy remained stable and the population continued growing, and if Second Life did not suffer any serious interruptions of service either through hacking, scalability failures, sale of the company, or other unforeseen acts of God-- why, Anshe Chung's account holder would have, at the end of that long and arduous process, well over $1,000,000." from New World Notes  ¶ 2:02 PM

Friday, November 24, 2006
"Manifestos are inherently for stupid people who can't fly by the seat of their pants, live their lives, and change as change is called upon." -Steve Reich .  ¶ 10:16 AM 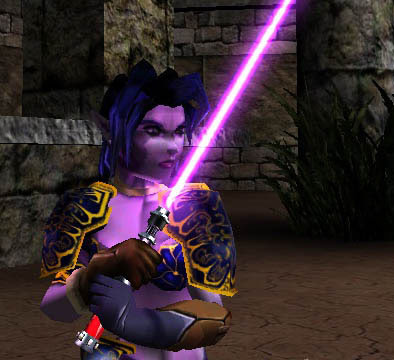 Every Time You Vote against Net Neutrality, Your ISP Kills a Night Elf (via Terra Nova)
if the gaming industry is afraid of Congress taking away Net Neutrality... it gives more hope for deeper pockets to lobby.  ¶ 9:57 AM 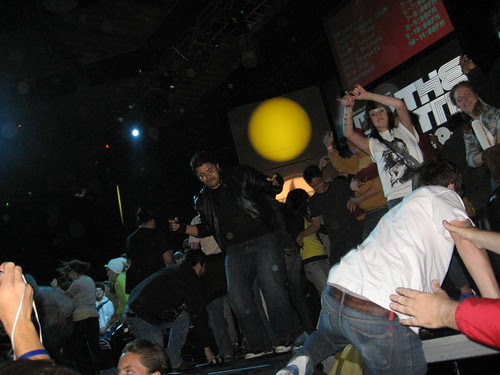 this photo is right before GT is shut down at the RIOTTT festival. here's some info from GT's publicist:
Approximately ten minutes into a frenzied set at San Francisco's Be the Riottt Festival on November 11, Girl Talk's sound was cut and he had to exit the stage, leaving the man behind Girl Talk, Gregg Gillis, and his audience angry and confused. Girl Talk's live sets have gained recent notoriety for their sheer madness-hoards of fans on-stage, broken equipment, and routine nakedness. Authorities for Be the Riottt shut Gillis down after only ten minutes, citing the presence of too many fans on-stage as a threat to fellow act The Rapture's gear. Several witnesses attested that no gear was destroyed. Just hours after the episode, Girl Talk's MySpace page was full of comments from fans sympathizing with Gillis and criticizing the way that the incident was handled, considering Be The Riottt's manifesto "One Will Rise".

Gillis also issued a statement, via MySpace bulletin, addressing the situation:
"Nov 13, 2006 3:16 PM - Subject san francisco - be the riottt - oops - HEY everyone who went to the be the riottt festival in san francisco, thanks for coming out and paying for those tickets, pretty cool move on your part. thanks to everyone who jumped on stage and made things get really real really fast. i just want to say that the organizers of the show told me it was alright to invite people on stage, so them cutting me off was a huge surprise. i then asked the organizers to just turn me on for five more minutes and we could get everyone off the stage, and they said "no." i asked to have the microphone turned on so i could so "good night" and they said "no." they were worried about a number of things, including The Rapture's gear getting trashed (which did not happen at all), and i told them before i played that they probably don't want to set up the Rapture's gear until after I was done, and they agreed. but then they set their stuff up regardless. SOO, again, it was a blast, and everyone did the right thing, and it was no one's fault that it got shut down. i'll be playing at the Indepedent in January, so you can see a real show if you want. date will be posted on my myspace soon. Thanks Gregg"

In a letter to Girl Talk's booking agent, Sam Hunt at The Windish Agency, one of the promoters of the festival, Sean Miyashiro, expressed his frustration and apologized profusely for Girl Talk's sound getting cut, assuring Hunt the call was not made by the organizers of Be the Riottt, but instead blamed the people who run the venue, Bill Graham Auditorium. Miyashiro seemed to be among those perplexed by the venue's decision, and online speculations for pulling the plug included the set times running behind schedule, or the inability of the venue to cope with Girl Talk's bringing the party to the stage. As Pitchfork's Matthew Solarski so eloquently put it, "Either way, effing lame dudes."  ¶ 10:32 AM

Thursday, November 16, 2006
"The tourist’s quest is rooted in fetishism of the foreign culture. Rich cultural activities lose their significance and become spectacles to relate to friends and family when one returns home. People from other cultures lose their individuality and are streamlined into archetypes. History ceases to be of cultural consequence and is either relegated to a museum or discarded outright. The same occurs with musical appropriation, which fetishizes foreignness." from The Triumph of Musical Tourists  ¶ 5:32 PM

Thursday, November 09, 2006
"Re-listening to Night Ripper as an experimental collage rather than a DJ mix, I'm far more forgiving of its off-the-meds hyperactivity. Since Gillis only drops the hardest hooks from every song he samples, the whole album bangs with an exhausting relentlessness that's far more Bad Brains than Paul Wall. Girl Talk is to DJ culture as Lightning Bolt is to metal or John Zorn's Naked City is to jazz—genre bending, mega intense, distilled and concentrated, familiar yet foreign, and intoxicating in small doses." Chas Bowie in The Portland Mercury

(i could post a press or blog quote for Girl Talk almost daily, but very few contain any new insight. one of the coolest things, though, was opening up the Chicago Tribune in the local supermarket a few weeks ago and seeing a half-page article. i also took some odd pleasure in being able to walk into Circle K at the edge of campus and know that i could read about someone on Illegal Art in Rolling Stone, Blender, or Spin.)  ¶ 9:47 AM

4 stars review of On The Edge: The Femicide in Ciudad Juárez:
Sometimes art is less entertainment-centric but decidedly more valuable. Sometimes it is a revolution. But On The Edge: The Femicide in Ciudad Juárez is an enrapturing, if shocking, documentary that sets out to explore the myriad deaths that have befallen over 400 poor young women in this Mexican border town since 1993. Instead of taking a predictable murder-mystery plotline, this film delves deeper into the subtext of social, economic and cultural factors that have enabled these homocides to continue, without any punishment or investigation by the (corrupt?) police and governments at hand. How many murders could go unresolved for so long is only one of the many questions you'll be asking yourself. It may even mobilize you to join the fight. GZW  ¶ 10:56 AM

Monday, November 06, 2006
"...all music can only be the sum or part total of what has gone before. Every number one song ever written is only made up from bits from other songs. There is no lost chord. No changes untried. No extra notes to the scale or hidden beats to the bar. There is no point in searching for originality." ~ the KLF (from Brewster and Broughton via SG)  ¶ 12:41 PM