I haven't watched a Girl Talk youtube video for a while, and the beginning of this show in San Diego captures the anticipation and energy that builds up as he takes the stage. Pretty amazing and I'm sure the video doesn't even do it justice.  ¶ 5:57 AM

October Boondoggle post by Steev Hise (I'm duplicating the entire post since I think it shows some critical insight from someone truly invested in fighting for a better world, and not just invested in the culture of activisim):

"I just found out about 'October Rebellion,' a week of protests in DC against the IMF and World Bank. The cause is great but wow, what a waste. When are people going to get past marches and rallies? You'd think that after literally millions of people around the world on one day in 2003 marched against the impending war in Iraq and made no difference at all that people would start to re-evaluate this tactic on a large scale. But it doesn't seem like it's sunk in.

"Imagine what we could do if all the effort and time and money and calories went into other things, instead of being put into organizing all the marching and standing around chanting and waving signs, all the greenhouse gases spewed into the air by all those jet-setting activists flying to the mass mobilizations, all the jail support for the ones that get arrested, all the trials and lawsuits and medical bills for the ones that get charged and beat up and gassed, etc etc....

a very convenient post by CHICAGO¤lollie has all the videos from this upcoming dvd that have been uploaded to youtube.  ¶ 9:52 AM

Realistic in AngryApe:
"...a real mish-mash of sounds and genres, plus a wide variety of production techniques that never fails to excite. It's his wide taste in influences that has created his unique hybrid: from Mu-ziq and Kid Koala, to ELO and The Beatles, meaning that with such a colourful palette, you are guaranteed to never get bored."

and undomondo:
"...a plunderphonics project in the vein of our favourites Cassetteboy although not as funny as their UK counterparts. Taking bits and pieces from different music genres and mixing them in a lo-fi and anti-art manner, Canada’s Realistic is a helluva cool if you’re into Wobbly or culturejamming heroes Negativland." 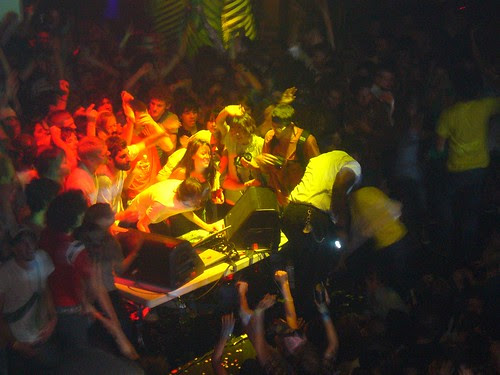 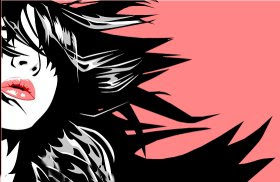 with Girl Talk on tour, there are tons of reviews out there (even mtv.com is covering it!)... mostly of the "party of the year" variety. it's sometimes more interesting, though, to read a more critical report. from 2nd Floor Living Without A Yard:
"... attendees vying for face time on the stage to populate their myspace profiles with cute pics of crashing the party, etc...When there’s more people scrambling over each other, pushing others around, generally being obnoxiously coked up trying to go on stage then actually enjoying the show on the floor - something's off."

and here is a more typical take on the madness from The Boston Globe: Everyone gets in on Girl Talk's stage act

Wednesday, September 12, 2007
Girl Talk tour starts today (most dates include Dan Deacon and White Williams unless otherwise noted). In general these are larger venues, and Boston, NYC, Philly, DC, Charlottesville, Atlanta, and LA are already sold out. [update: there is anothe NYC show late on the 15th at the Bowery Ballroom]

Raiding the 20th Century is an "attempt to catalogue the history of cut up music - be it avant garde tape manipulation, turntable megamixes or bastard pop mash ups." The full tracklisting, explanation, and mp3 are on ubu.com (via Make Your Own kind Of Music...)  ¶ 11:09 AM

Monday, September 10, 2007
"The most powerful use of computers in science is creating elegant, simple solutions to complex problems. When artists use the mechanical power of the computer to complicate rather than to simplify, it suggests that they do not understand the paradigms of the new technology. They have merely learned to manipulate the equipment." Ken Friedman  ¶ 5:42 AM

Realistic's Perpetual Memory Loss in the blogosphere
• The Devil Has The Best Tuna: "Standing somewhere between the left-field experimentalism of Negativland and the pop collaging of the The Avalanches Realistic borrows material from every possible source , like a musical rag 'n bone man, and uses it to create beautifully hypnotic and thought provokingly surreal soundscapes." >full post<
• GIMME TINNITUS: The Camera Track by Realistic
• Electronic Voice Phenomenon: "A funky yet subdued cut-and-paste piece in the mold of Girl Talk. Perpetual Memory Loss drops October 23rd via the Illegal Art label." >full post<
• mvremixmedia (and others) published the full press release
• Empty-Handed: "...different from his previous work, but still very recognizable as Realistic tracks. Always nice when an artist can pull off that trick." >full post<
• Hefur þú heyrt þetta?: ?????

(we have copies and plan to start taking orders. feel free to make contact if you'd like to order before we get it officially up on our pages.)  ¶ 12:01 AM