philoblog
Monday, February 28, 2005
Steev Hise's notes on Univ. of Iowa's Intellectual Property Symposium. it's even better than being there! of course i'll be there in a few weeks for Collage as Cultural Practice.  ¶ 10:21 PM

Thursday, February 24, 2005
PayPal Fee Calculator. now if there were an ebay+paypal calculator, that would be something.  ¶ 10:23 PM

Wednesday, February 23, 2005
a brief summary of BBC Radiophonic Workshop: "The Radiophonic Workshop was set up by the BBC's Drama department in the late 50s as a forum for the creation of what were initially termed 'Electrophonic' sounds to accompany specialist radio and TV productions. Most famed for Delia Derbyshire's electronic realisation of the Dr Who Theme, in its early days the Workshop was a hive of fervent sonic experimentation to rival IRCAM or any European electronic music studio (though with slightly different concerns and a considerably larger audience), till cutbacks killed it off in the late 1996."

Tuesday, February 22, 2005
i'm always curious about how "more established" labels function. it's amazing how large their international reputation can be, yet at the heart it's still a small cluttered mess. here is a description from a friend of a well known chicago label's headquarters. it doesn't sound too glamorous.

"6 people work there. they each have a little desk with a computer and whatnot. there is a tiny lounge area. the head guy has a little office, the rest of the desks are out in the big open area, which is divided up into two parts, the office part and the storage part. boxes boxes everywhere. clutter. they have a lot of stock. they are located in a huge factory type building along with companies that do stuff like manufacture nuts and bolts. the building is in the industrial district of chicago. it isn't a very nice neighborhood, but it isn't the worst either. thats about it."  ¶ 3:34 PM

Monday, February 14, 2005
"The circulation and readership of daily newspapers in the United States is declining significantly, even while our population is increasing. Specifically, the per capita circulation of newspapers in the U.S. in the last 30 years has declined from 300 to 190 per 1,000 population. To cite another measure, in the four years ended in 2002 the percent of those ages 25 to 34 who have read a newspaper during the past week (either in hand or on the Internet) fell by almost 10 percentage points — from more than 86 percent in 1988 to less than 77 percent by 2002 (U.S. Census Bureau, Statistical Abstract of the United States: 1989 [109th ed.], table no. 901; and Statistical Abstract of the United States: 2003 [123rd ed.], table no. 1127)... Why are these trends of concern? More and more people are not reading the news of the world around them or about the important issues of the day. They apparently rely on what others tell them or on the sound bites of television news, where even the most significant subjects rarely get more than 60 seconds. Where will this lead? It is leading us to a less concerned, less thoughtful, and less informed citizenry, and that results in less responsive and less responsible government." - Dallin H. Oaks  ¶ 6:45 AM 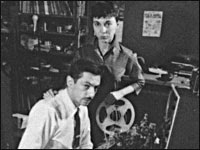 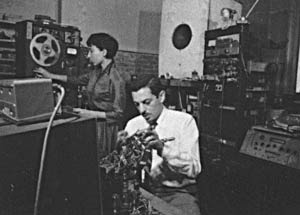 Monday, February 07, 2005
“I have walked out of concerts on several occasions. Because I asked myself if it would be better for me to be here listening to this music or at home working.” - Brice Pauset  ¶ 1:39 PM

Terre Theamlitz's Couture Cosmetique 1997. listening to this after not hearing it for years. one of my all-time favorite albums.   ¶ 10:46 AM