philoblog
Friday, September 29, 2006
reading about the N.W.A. case (from a couple of years ago), i came across this bit that i hadn't heard before:

"Does the decision go too far? The Recording Industry Association of America (RIAA) thinks so. In an amicus briefing, the RIAA argues that the appeals court decision is unprecedented and unsustainable, and unfairly treats digital recordings as different from other copyright issues. Sampling cases, says the RIAA, should continue to be evaluated on a case-by-case basis, applying the de minimis standard to determine whether an infringement is significant enough to be worth judicial consideration."

"So why is the RIAA, a staunch defender of strict copyright law in its battle with music piracy, arguing in this case for flexibility in the law? Simple: as a representative for recording labels, the RIAA must be concerned about a legal precedent that is too broad, resulting in extensive, expensive litigation. Making matters worse, the appeals court decision doesn’t even have its facts straight: the decision makes a blatant, fundamental error about copyright law, claiming that recorded material dating from before 1972 is unprotected." more->  ¶ 8:49 AM

Wednesday, September 27, 2006
from CMJ NMM article titled Gregg The Ripper:
"It would take forever for each and every publisher linked to the tracks to settle and confirm shares," says Jane Park, mechanical licensing manager at Spirit Music, which handles the publishing for artists like the Waitresses and Billy Squier, both of whom are sampled on Night Ripper. "In other words, it's way too much time and effort for an almost negligible piece of copyright that may never get settled. As publishers, we are more concerned with chasing unlicensed material with more lucrative weight."

the SF Bay Guardian simultaneously put out an article with the exact same title & also posted their entire interview with Gregg.  ¶ 10:14 AM 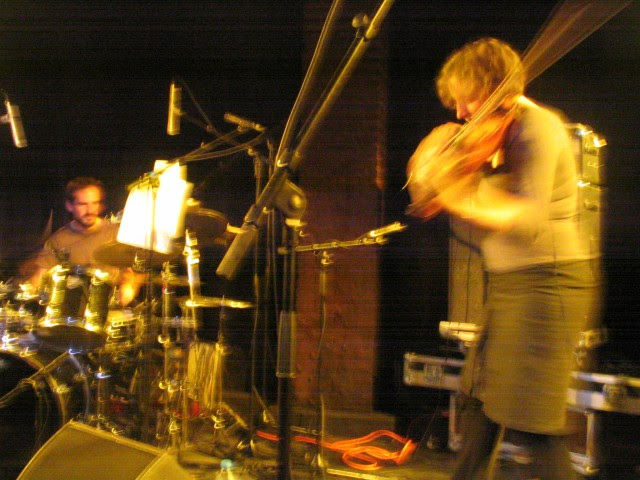 "...the capacity for music is a long-developed, widespread, genome-encoded talent that exists as a general characteristic of our entire species, and plays a strong role in sexual selection, social bonding and cohesion, and even cognitive development itself." from this article (thanks Mom!)  ¶ 9:51 PM 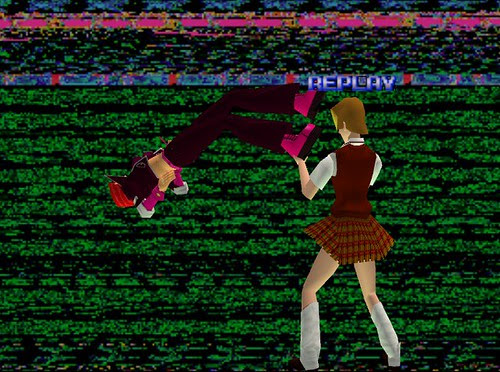 Friday, September 22, 2006
"I think he has been a far more ideological president than we've seen in many years. ... I think that's lead to significant mistakes. I think it's part of the reason we have seen the misjudgments in Iraq. It's part of the reason we have tried to cut taxes, fight two wars, without paying for it. I think reputably what you've seen in this president is ideology over fact and evidence. I think that always gets us in problems if you're on the right or on the left." -Barack Obama  ¶ 11:17 AM

Friday, September 15, 2006
NIN/Star Trek mashup (via rumori)
it doesn't get much better than this. very expressive and no original content.  ¶ 1:55 PM

Tuesday, September 12, 2006
Empty Bottle sold on on Saturday (capacity is 400+!). it was like no other live show i've seen. people screaming, dancing, jumping up on stage... and Gregg happens to be both a really nice guy in person and has the stage presence of a cultural icon. he played a longer set (45-60 min.) considering he only commits to 30 minute shows. rumors are already circulating that he'll be back in Chicago before the end of the year ;). here's Pitchfork reviews of both the Empty Bottle and the Mercury Lounge shows. if you'd rather not read reviews, here are a couple of youtube videos they posted of the Empty Bottle show:


other Girl Talk info: Gapers Block interview and GT's own blog post of the Blender party & opening up for Beck. the best part from the Blender party is "security came into the room and got between the G-Unit dudes of my friends. They started kicking Lloyd Banks and crew out of my V.I.P. room and eventually kicked all of us out together." here's Gillis & Beck:

Friday, September 08, 2006
nevermind mySpace, now there's myOwnSpace. from my initial browsing it seems that all the music is experimental electronic and such. so i guess it's meant as a parody.  ¶ 10:55 AM

spam message of the day:
"My name is kingsley am interested to buy your goods but i don't really understand the kinds of goods you are selling. could you pls tell me more about it so that i can order for it as soon as possible,"  ¶ 9:16 AM 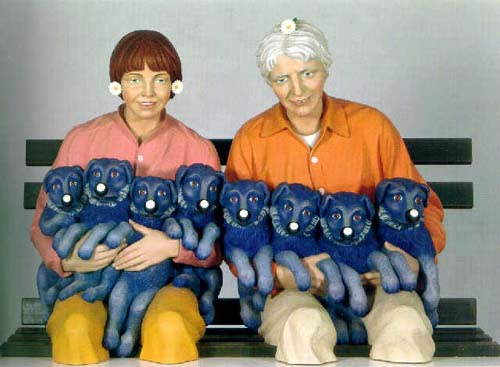 and another Koons Puppy 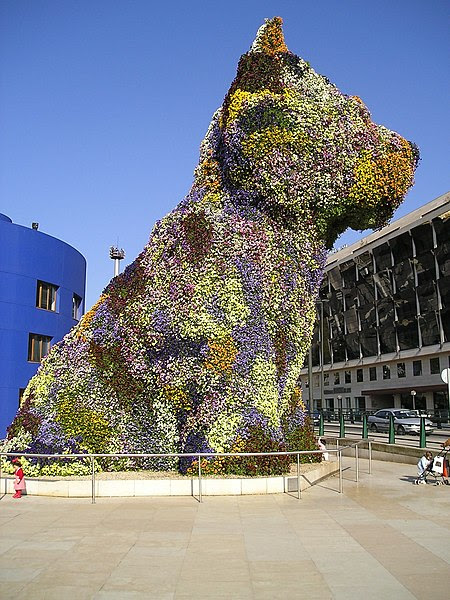 Friday, September 01, 2006
"...America's black inner cities have been denuded of their adult men. It started, in my memory, in the 1960s with the enforcement of the man-in-the-house rule, whereby welfare families were cut off if investigators could establish that an adult able-bodied male (whether or not he was employed) lived in the household. And the de-manizing went completely out of control with the introduction of absurdly long and mandatory sentences for crack cocaine offenses and the implementation of such judge-proof policies as the three-strikes-and-you're-out rule. The result is that huge numbers of black men are being taken out of their communities -- overwhelmingly for nonviolent offenses... Except now we know. Social scientists across the political spectrum tell us that father absence is a stronger predictor of criminal behavior than family income, education -- or (Bill Bennett take note) race." -William Respberry  ¶ 6:33 AM