"The German art critic Walter Benjamin once rebuked the Surrealists, demanding that artists who assume the mantle of revolutionaries would do better engaging actual political struggles than promoting their individual artistic careers. Benjamin challenges artists to pursue sustained and committed relationships with social movements." from Public Record

the most recent release on Public Record is from my friend/hero Terre Thaemlitz and the radio drama deals with the politics of copyright ownership (amongst other things).  ¶ 9:53 AM

Friday, May 25, 2007
"Let me put this bluntly, in language even a busy blogger can understand: Criticism — and its humble cousin, reviewing — is not a democratic activity. It is, or should be, an elite enterprise, ideally undertaken by individuals who bring something to the party beyond their hasty, instinctive opinions of a book (or any other cultural object). It is work that requires disciplined taste, historical and theoretical knowledge and a fairly deep sense of the author's (or filmmaker's or painter's) entire body of work, among other qualities." film critic Richard Schickel (via Largehearted Boy)  ¶ 9:45 AM

Thursday, May 24, 2007
from empty-handed.com: "the WFMU summer schedule starts up in about a week and a half. And there's one very special show that you absolutely have to listen to: A Rough Mix, with Steinski. Yes, the author of the Lesson mixes returns to the airwaves with (hopefully!) some new content for the listeners. Steinski had a WFMU show about a decade ago, so he could even just re-run those old shows and loads of listeners would be happy. Keep an eye on the WFMU program archive area, because those shows are going to be the soundtracks of your summer parties this year."  ¶ 4:27 PM

customer review of On The Edge (via amazon, who is selling the bulk of the copies):

I live in Oklahoma and I had no idea this was going on. How can over 400 young Mexican women be murdered so casually, yet less than three percent of the murders be "solved?" When you add in the fact that another 4000 are missing, presumed dead as well, the numbers get to be staggering. The evils behind this social injustice are even worse. And they're all accepted, to one degree or another.

Steev Hise considers himself to be an artist who digs around in culture, finding old things that interest him and making them new again. I think he's more of a crusader than he's willing to admit. He keeps himself out of his production and lets the facts and the people involved talk about the murders and the casual acceptance of it. It's going to be interesting to see where he goes next.

The DVD is powerful and shocking. Hise evidently found a number of people who have been talking about the murders for years, seeking some kind of justice, and he allows their passion burn on the screen. More than that, he breaks the film into segments that underscore all the social causes, economic causes, and political causes that have contributed to the deaths of so many. The presentation is well thought out, and well argued.

If you don't know about these murders, you will. Either through this DVD or through two Hollywood movies coming out that touch on the subject matter much more lightly than Hise did. One is an upcoming Jennifer Lopez/Antonio Banderas film.

Even more disturbing is the fact that Ciudad-Juarez may be the model for the coming world as corporations continue to run things and benefits for employees continue to disappear. It's easy to think this is just a horrible thing happening to an economically depressed border town, but it's even worse whe you start thinking this may be the blueprint for the future.  ¶ 5:54 AM

since Tower Records folded, Amazon has become a larger seller for independent music. with that, though, they're demanding higher discounts from distributors (going from 6% to 9% w/ one of our distributors). distributors don't have much choice. i'm sure they're negotiating terms as much as possible, but at the end of the day Amazon is becoming the Walmart of online sales, and no one really has much leverage against such giants. oddly (to me at least), only a small percentage of people buy direct from labels. 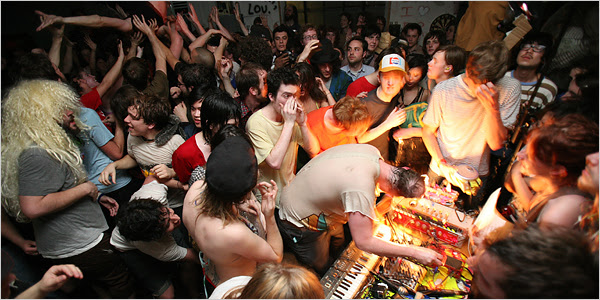 from the Department of Justice: Intellectual Property Protection Act of 2007

"The 24-page bill is a far-reaching medley of different proposals cobbled together. One would, for instance, create a new federal crime of just trying to commit copyright infringement. Such willful attempts at piracy, even if they fail, could be punished by up to 10 years in prison." cnet also from a couple months ago Random Rules on the A.V. Club (the comments are entertaining)  ¶ 10:50 AM

Wednesday, May 02, 2007
Johnny Firefly explains The History of the BOMB!