Tuesday, July 24, 2007
“Decoying and Spoofing are the most commonly known techniques that we employ. We send blank files and data noise that look exactly like a real response to an initiated search requests for a particular title. Pirated files will no doubt be on the networks, but with our protection applied it would be easier to find a needle in a hay stack than a real file amongst our countermeasures.” Media Defender via TorrentFreak's post ZipTorrent Pollutes and Slows Down Popular Torrents  ¶ 2:22 AM 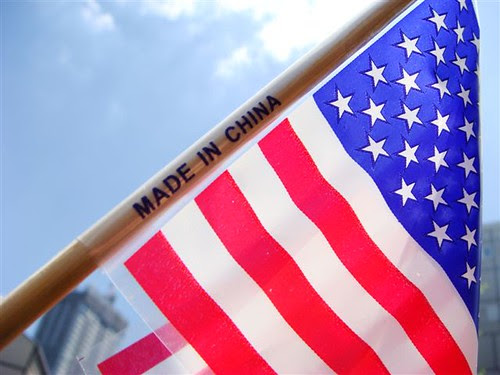 Tuesday, July 17, 2007
from Playboy.com. i would normally not give them props, but these photos are really nice and posting them here alleviates my excuses to return to their site.

quick report of Pitchfork Festival on Saturday......
Califone - very nice, i definitely want to acquire some of their recordings.
Voxtrot - fun poppy rock. much more enjoyable than i thought.
Grizzly Bear - beautiful. amazing vocals and instrumentation. i'm a fan.
Fujiya & Miyagi - heard from a distance. too crowded for the kids, we almost got trampled sitting on our blanket and had to pick up and head out.
Professor Murder - fun, and about as close to the stage as Chuck & I got all day.
Dan Deacon - not loud enough, and i understand he has reasons to play in the audience, but when 98% of the audience can't see or even hear that well, what's the point? amazing, though, to see how hyped up everyone was for this.
Girl Talk - even more crowded than Fujiya and DD in the smallest stage area. we crowded in. the kids had to leave after the first part for fear of being squashed, but they saw a bit of the insanity. not as difficult to hear as DD, but still... it could have been much louder.
Yoko Ono - caught the tail end, and it was enough.
(also caught bits of others, but no real impressions... only wish I could have seen Battles. everyone wants to go again next year!)

rhetorical questions from metromix: Pitchfork: Day 2
"Why was Girl Talk’s Gregg Gillis put on the Balance Stage and not given more space and volume to work with?" 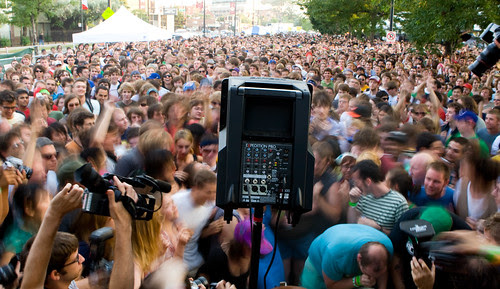 Thursday, July 12, 2007
"But this unconciousness about 'servitude' really is nothing new. If we can't get teens to recognize their roles as human billboards when they wear sports gear emblazoned with logos, dreaming the dream that maybe they will be the next Michael Jordan if they just buy enough pairs of Nikes, how can we possibly get them to understand the exploitation happening with MySpace, YouTube, and other corporate social networking sites?"

in response to Trebor Scholz's essay:
What the MySpace generation should know about working for free

almost everything you read about social networks, web 2.0, etc. is very positive and utopian. so it's interesting to see this other side of how it may be liberating to freely post content on these sites, yet at the same time you're also freely contributing to a corportate entity that benefits financially from your content.  ¶ 10:33 AM

Saturday, July 07, 2007
CDs Are Too Long: A Personal Tirade
this is an article i found while trying to research how short albums can be.... opinions seem to vary... and i struggle with the issues of having things be too short vs. having a longer album that may have 1-2 tracks that may be questionable.  ¶ 4:38 PM

the p4k love never stops. Video: Girl Talk: Live at the Montreal Jazz Festival. and only a week until the festival.

and here's a description of Bonnaroo from starpulse.com: "...mash-up genius Girl Talk (aka Gregg Gillis) came to his midnight show outfitted with only a laptop. He left with even less: by the end of his set, the 20 or so fans who'd barnstormed the stage to dance had literally stripped him down to his boxers. One blonde girl strolled by the AP happily twirling Gillis's pants above her head, while another sauntered off clumsily wearing his jacket and an expensive-looking pair of oversized Nikes. With his pop mosaics pre-loaded on his computer - everything from Notorious B.I.G. to Neutral Milk Hotel twisted into a myriad of adjoining shapes and textures - there wasn't much left for Gillis to do but dance. ''Don't even look at the stage right now,'' he shouted. ''Turn around, and dance with the first person you see.'' Then, for about five minutes, having realized that they were essentially in the same position, artist and audience turned their backs on one another and just got down. A few minutes after that, Gillis hurled himself into the crowd just as his music died. We never saw him again."  ¶ 11:52 AM

iTunes is finally coming around to offering more flexible pricing and DRM-free options. Apple's Next Big Thing: tiny prices for iTunes albums (+ some cynical insight in the comments)  ¶ 5:26 AM

Monday, July 02, 2007
"Bottled water is often simply an indulgence, and despite the stories we tell ourselves, it is not a benign indulgence. We're moving 1 billion bottles of water around a week in ships, trains, and trucks in the United States alone. That's a weekly convoy equivalent to 37,800 18-wheelers delivering water. Meanwhile, one out of six people in the world has no dependable, safe drinking water. The global economy has contrived to deny the most fundamental element of life to 1 billion people, while delivering to us an array of water 'varieties' from around the globe, not one of which we actually need. That tension is only complicated by the fact that if we suddenly decided not to purchase the lake of Poland Spring water in Hollis, Maine, none of that water would find its way to people who really are thirsty." from Message in a Bottle  ¶ 11:26 AM