The Pitch in Kansas City reveals Steinski's upcoming album to be titled What Does It All Mean? (the subtitle has already changed since this news item was posted). We're hoping to finalize everything in the next week and get it off to a manufacturer. Hua Hsu and Steinski are both contributing to the liner notes.  ¶ 7:04 AM

Wednesday, October 24, 2007
HIPSTER RUNOFF: Let's be REALISTIC
"Do you think Illegal Art recruits non-music making professionals on purpose? Remember when Gregg Gillis (AKA Girl Talk) used to be a biomedical engineer? Working with young professionals must be more reasonable than trying to promote hollow kids in a 'fresh band' with not-so-innovative music."

and it goes on about Realistic:
"So for people who want oversimplified descriptions, it's kind of like Girl Talk, the Books, The Avalanches and some other sample based music. It's definitely worth blogging about."
(thanks JT)

also some release-date blogging (that copy and pastes previous info) at BC Goodie Bag, Parasite & Sycophants, and Indie Waves... and a more intimate look from a friend of Realistic at The Known Universe.  ¶ 9:58 AM

"Brooklyn-based James Towning (a.k.a Realistic) deserves his place next to Girl Talk on the Illegal Art roster. Incorporating a myriad of samples from rock to self-help records, Realistic has set a new template for eerie downtempo. If sound collages that bump had a poster boy, it would be this advanced producer." -xlr8r.com/downloads  ¶ 6:40 AM

Videos made to Girl Talk tracks from Night Ripper using the corresponding music videos. Two more: That's My DJ and Once Again. These are the first three tracks (in reverse order) and so it seems as though Negyxo is going to do the entire album!?!  ¶ 9:42 PM

CarianaCarianne
Initially I thought it was a conceptual art prank, but after her/their presentation and q&a, I think she/they really believe that they are two people in one body.  ¶ 1:29 PM 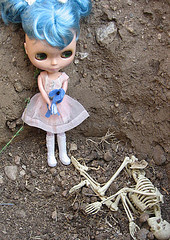 Thursday, October 11, 2007
Realistic's Perpetual Memory Loss is breaking into the top 10 RPM charts on ten stations over the last couple of weeks (and coming in at #4 on RPM Adds last week, with 30 stations adding it).

Negativland Q&A: In the Future, Nothing Will Remain Intact

"All so-called original work today is so full of genre and technique copying it's not even funny. So be it, this was always true, it's how art progresses, and it will continue because most people really do prefer twists on the well-worn and familiar to the unknown. Collage is all about twisting what is old into something new, still a defining method in modern creativity as time goes by. Simple legitimacy will come to collage when we all cease seeing the reuse of existing work to make new work as either uncreative or a crime or both." -Don Joyce

"It is naive to think that technologies are neutral and that we make of them what we want. I don't believe that. They do change us and we warp ourselves and our lives to fit the technologies, not the other way around. Look no further than the invention of the automobile to see what I mean." -Mark Hosler

"More than ever, collage art becomes all about being able to select the special thing out of an ocean of way too many things. ... As Duchamp and Warhol predicted before they ever saw a computer, there is an art and a "message" in the act of selection itself. The digital era has found them to be ever more correct." -Don Joyce  ¶ 6:32 AM

Oh Astro makes this week's XLR8R top 10...
"In true Illegal Art fashion, Jane Dowe and Hank Hofler’s first full-length as Oh Astro is comprised almost solely of sampled material, but this is far from a Girl Talk record. Champions of Wonder is an experimental conglomeration of glitchy techno, ambient, and broken-beat, all layered with distorted vocals that offset the album’s poppier moments with ghostly eeriness." RH

Yea Big + Kid Static, who collaborate with OA on each other's discs, is also featured...
"This LP is worth listening to just for Deejay Yea Big’s production. Stuttering, glitchy, and just plain jaw-dropping, Yea Big’s beats are up there with the big guns of Prefuse 73 and Daedelus. With Kid Static’s humorous, yet angst-filled rhyming filling it out, this duo have put excitement and innovation back into hip-hop." RH  ¶ 9:04 AM

Tuesday, October 02, 2007
from Time: Radiohead Says: Pay What You Want
"This feels like yet another death knell," emailed an A&R executive at a major European label. "If the best band in the world doesn't want a part of us, I'm not sure what's left for this business."

Labels can still be influential and profitable by focusing on younger acts that need their muscle to get radio play and placement in record stores — but only if the music itself remains a saleable commodity. "That's the interesting part of all this," says a producer who works primarily with American rap artists. "Radiohead is the best band in the world; if you can pay whatever you want for music by the best band in the world, why would you pay $13 dollars or $.99 cents for music by somebody less talented? Once you open that door and start giving music away legally, I'm not sure there's any going back."

The ramifications of Radiohead's pay-what-you-want experiment will take time to sort out, but for established artists at least, turning what was once their highest-value asset — a much-buzzed-about new album — into a loss leader may be the wave of the future. Even under the most lucrative record deals, the ones reserved for repeat, multi-platinum superstars, the artists can end up with less than 30% of overall sales revenue (which often is then split among several band members). Meanwhile, as record sales decline, the concert business is booming. In July, Prince gave away his album Planet Earth for free in the U.K. through the downmarket Mail on Sunday newspaper. At first he was ridiculed. Then he announced 21 consecutive London concert dates — and sold out every one of them.  ¶ 12:11 AM