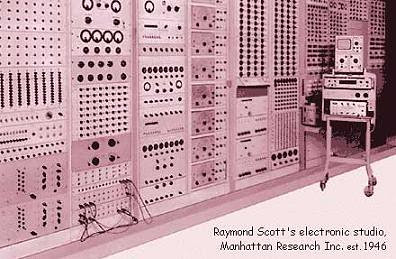 Raymond Scott blog: "The Bran Flakes have been given free reign to plunder the Scott catalog and mash together a Scott centennial remix album. More news on this as-yet untitled project as it develops."  ¶ 2:33 PM

German performance/media artist Johannes Kriedler created a composition comprised of samples taken from his own music collection. In order to legally present the work he is obligated to register each sample with GEMA (Germany's equivalent to the RIAA) by way of formal paper documentation. So what's the big deal? Well, Kriedler's piece uses a whole lotta samples - 70,200 of them make up the resulting 33 seconds of audio entitled product placements.
(thanks to dj empirical!, text from MAKE: Blog: So many samples, so little time post)  ¶ 9:29 AM

a four-star Rolling Stone review (in the current print issue as well)  ¶ 9:50 AM

Tuesday, August 19, 2008
Village Voice: MP3 Debut: Steinski, "What Was Raymond Doing With His Hands? (A Soundtrack for a Real Swinger of a Nightmare)"

hooray! The Bran Flakes have officially signed to Illegal Art to release their upcoming (and best album ever!) "I Have Hands." more info in the coming months... the album will hit in the first part of 2009 followed by a summer tour.  ¶ 2:10 PM

Tuesday, August 12, 2008
NY Times: "All aspects of creativity are basically reconstituted bits and pieces of things we've seen, heard and experienced, finely or not-so-finely chopped and served in a form that hopefully blends the ingredients into something 'new.'" from "Rip-Off Artist" op-ed by Jeffrey Lewis (via steinski.com).

if only all musicians recognized this bit of wisdom, sampling artist would no longer be relegated to the fringes.  ¶ 3:41 PM

Monday, August 11, 2008
"Illegal Art is basically saying, 'We’re claiming Fair Use, come and get us.' No one wants to take ‘em up on it because if you lose, well, it changes the industry forever and if you win you just shut down an album that’s going to sell, what, fifteen thousand copies?" from FISTFULAYEN  ¶ 11:49 AM 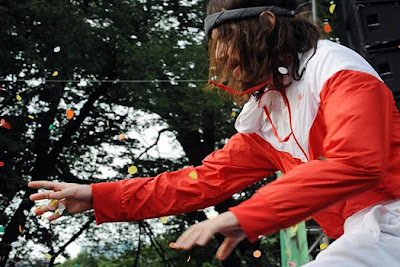 "By now everyone knows what to expect from a Girl Talk gig. Gregg Gillis’ reputation precedes him as the man to call to get the party started. The problem with so many Girl Talk sets is that, once started, someone freaks out that the Girl Talk party has gotten out of control and calls the cops.

"Security kept a watchful eye on Gillis and the gang of lucky hangers-on gathered on the stage to dance and gyrate alongside him as Gillis’ stagehands shot rolls of toilet paper and giant inflatable “G”s and “T”s out over the increasingly vast and energized crowd. As usual, the line between audience and performer was blurred into irrelevance as chaos ruled. Meanwhile, back behind the action, a paramedic crew was busy dealing with a dude waylaid by too much fun, the guy splayed on the sidewalk while the pros went to work.

"And what is it that sends these fans into fits of giddy paroxysms? It’s all in the pacing (there’s a reason Gillis has taken to starting out his set in a tracksuit). The cavalcade of familiar songs are part of what makes each Girl Talk set fun, sure, but so is the way Gillis gradually recontexualizes them with fresh beats or contrasting samples. Really, who else would dare funk up Sinead O’Connor’s “Nothing Compares 2 U” or set Journey, Boston, and Styx against chunks of Clipse and the Yin Yang Twins? Only the type of guy who would top off his performance by riding an inflatable raft across the crowd, that’s who."
(Pitchfork review of Lollapalooza)"

some more photos from the Village Voice: 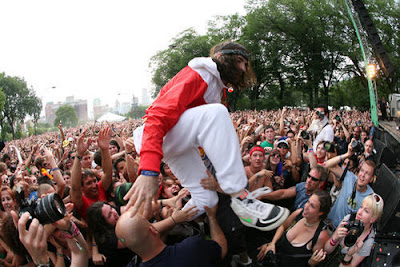 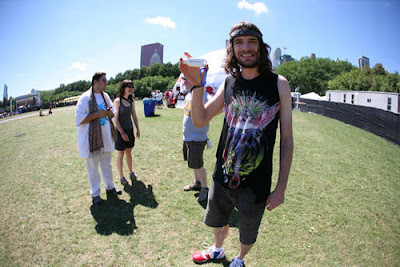 and...
"7:20 p.m.: Girl Talk’s Gregg Gillis has a habit of stealing the show at big festivals. He did it last summer at Pitchfork in Union Park, and he’s doing it again right now. He invites fans on stage to dance along to his walloping mash-ups of X-rated rap and classic rock, while various minions toss rolls of toilet paper, beach balls and a giant clear-plastic bubble into the crowd. Then Gillis mounts an inflatable raft and surfs across outstretched hands atop the audience. Kanye West cruises back stage in a golf cart wearing an approving grin. (GK)" from leisureblogs.chicagotribune.com

and another report of the massive crowd...
"6:40 p.m. I have never seen one of the Lolla street stages as packed as it was for Girl Talk. A positively sweaty crowd was backed up almost to the vendor row on the other end of the roadway and spilled out heavily into the trees on either side of the Citi Stage. The hype was justified. While 100 or so fans did their best to collapse the scaffolding on either side of Gregg Gillis, the laptop DJ assembled an unconscious mashup set of rock beats and hip-hop bangers. You didn't hear Radiohead, M.I.A., Kanye West, Notorious B.I.G. or Jay-Z for more than a few seconds, but each sample imprinted itself on your brain. That the audience came so ready to party only added to the insanity. I never imagined a laptop DJ could elicit this kind of response. Gillis, however, proved me wrong." from chartattack.com  ¶ 11:03 AM