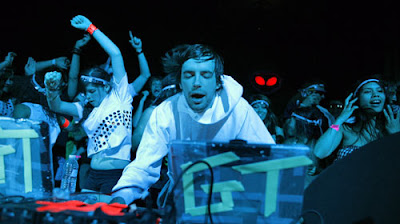 If we could sift through Coachella's text message traffic, and weed out all entries containing the phrase "where are you," it's safe to assume that between 9 and 10 P.M., hordes of nimble-fingered young'uns were urging their posses to meet at the Sahara Tent for Girl Talk. Sheer adrenaline supplanted the boozed up/stoned vibe that dominated other stages (see: Silversun Pickups) -- really, who needs to be chemically enhanced when Girl Talk, a.k.a. Gregg Gillis, is standing atop his DJ table, egging on the crowd like LaBron James in a playoff-caliber pre-game ritual? With his usual bevy of American Apparel-wearing fans onstage (color coordinated to some degree in white cotton and silver sequins), Gillis reached back into the '90s section of his laptop's hard drive, squeezing in bite-sized pieces of Weezer's "Say It Ain't So" and Red Hot Chili Peppers' "Under the Bridge." And while those tunes are older than most of his fans, it's all good when chopped up into 30-second bumps for easy ingestion by Generation Ritalin. -- Peter Gaston (Spin)

Pirate Bay fileshare four jailed for a year  ¶ 9:22 AM

Pimp my ticket: Ticketmaster's “resale” model is landing the company in hot water.  ¶ 8:26 AM

Thursday, April 02, 2009
"Research from numerous corners of psychological inquiry suggests that self-assessments of skill and character are often flawed in substantive and systematic ways. ... In general, people’s self-views hold only a tenuous to modest relationship with their actual behavior and performance. correlation between self-ratings of skill and actual performance in many domains is moderate to meager—indeed, at times, other people’s predictions of a person’s outcomes prove more accurate than that person’s self-predictions. In addition, people overrate themselves. On average, people say that they are ‘‘above average’’ in skill (a conclusion that defies statistical possibility), overestimate the likelihood that they will engage in desirable behaviors and achieve favorable outcomes, furnish overly optimistic estimates of when they will complete future projects, and reach judgments with too much confidence. Several psychological processes conspire to produce flawed self-assessments." from Flawed Self-Assessment summary  ¶ 9:42 AM 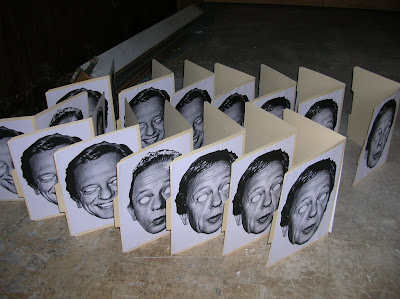